Visual Stress is a reality for about 20% of the population. It can cause headaches, migraines, reading discomfort and distortion of text that can vary from mild to so severe that reading is seriously impaired or even prevented.

Many children with specific learning difficulties such as dyslexia and autistic spectrum disorders have obvious difficulties with reading and writing that impair their performance in the classroom. These disabilities are often, and correctly, attributed to the processing problems that have been identified as part of their condition.

However there are many cases when a child who has been identified as, say, dyslexic, experiences reading problems that are not in fact a consequence of those "dyslexic" difficulties that are usually identified with reference to a phonological processing deficit. They actually result from an entirely separate (although often co-occuring) condition which, because it exists alongside the dyslexia, dyspraxia, ADD/HD or autism, can either be masked by it and therefore not addressed as a separate issue, or confused with it with the result that other aspects of the disability may be neglected.

Unlike Dyslexia, which is a distinct neurobiological difference and for which there is no "quick fix", the effects of Visual Stress can often be easily and inexpensively remedied by the use of coloured overlays or lenses. However, although colour can often be the key, not any colour will do. For each child there is a specific hue (tint) and saturation (depth of colour) that will "work" best, so it is important that a sufficiently wide selection of colours is provided so that everybody's needs are met. In some cases children requiring a deeper saturation "double up" two overlays of the same colour to achieve the desired effect. 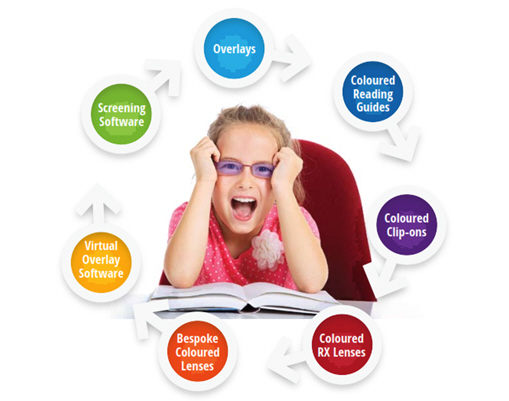 In some cases, the use of tinted lenses may be preferable to intervention with coloured overlays. For example, overlays may reduce or eliminate the effects of glare on a printed page in a classroom, but the writing on the whiteboard at the front or the posters on the wall may still be causing significant problems. In some cases it may be appropriate for coloured lenses to be prescribed, although as children get older they often become increasingly self-conscious about their lenses and may "forget" to wear them.

What about text on Computers?

Overlays and Reading Guides are great for reading printed text – but what about reading on a computer screen? Clip-Ons and spectacles can be used but why not just tint your screen! There is Virtual Overlay software out there which allows you to change the colours on your PC at the click of a button. If you are using Word or Excel or other software which uses the Windows colours, you can set both the text and background colour to any colour you like.